We miss seeing you at the movies! While the John & Nancy Hughes Theater is closed for the time being, we thought we would bring you the next best thing–virtual theater.

‘Life Itself’ recounts the surprising and entertaining life of world-renowned film critic and social commentator Roger Ebert – a story that’s by turns personal, wistful, funny, painful, and transcendent. The film explores the impact and legacy of Roger Ebert’s life: from his Pulitzer Prize-winning film criticism and his nearly quarter-century run with Gene Siskel on their review show, to becoming one of the country’s most influential cultural voices, and finally to Roger’s inspiring battles with cancer and the resulting physical disability – how he literally and symbolically put a new face on the disease and continued to be a cultural force despite it. 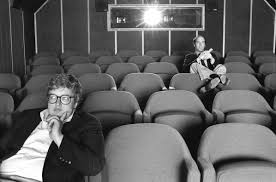 This virtual cinema screening is being hosted by an outside distributor, Magnolia Pictures, not the Gorton Community Center. If you encounter technical issues or have questions, please email INSERT HERE or visit.

Additional dates for this event:

Also in the Virtual Theater